Once the capital of Islamic Iberia—or Al-Andalus, from which Andalusia inherits its name—Córdoba was a leading center of culture and science and a jewel of the medieval world. Today, it still beams with beauty. Even in the trough of winter, luscious-looking oranges ripen and release their sweet fragrance under the expanse of a spotless blue sky.

As New Year’s Eve provided a good reason to be indulgent, we booked a room at Las Casas de la Judería, a charming and pristine establishment in Córdoba’s old Jewish Quarter just a stone’s throw away from the iconic Mosque-Cathedral and the Alcázar of Córdoba—one of the primary residences of the Catholic Monarchs, Ferdinand and Isabella.

Strolling through the white alleys of the judería, it’s inspiriting to imagine that more a millennium ago, Jews, Muslims, and Christians were already living harmoniously in coexistence. In fact, the Jewish population formed an integral part of the city’s demographics right up until the Spanish Inquisition.

In 1492—the same year that the Emirate of Granada fell to the Catholics and Christopher Columbus happened upon the West Indies—a royal decree issued by Isabella and Ferdinand of Spain forcibly exiled all non-converting Jews, ultimately giving rise to the Sephardic diaspora. Many of them must have crossed the Roman bridge out of Córdoba as they embarked on arduous treks towards unknown lands in other parts of Europe and North Africa. Later generations of Sephardic Jews eventually also sailed across the Atlantic, making their way to the Americas in pursuit of religious tolerance.

Back in present day, the narrow streets of the Jewish Quarter led us past a distinctly Cordovan tradition. The city’s courtyards, or patios, are known throughout Spain for their vibrance and festiveness. 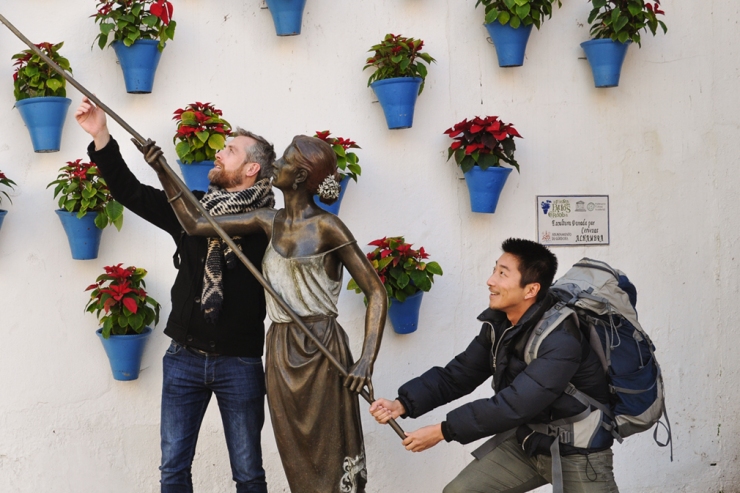 Much like the courtyards of the Alhambra, these patios cordobeses rose out of a desire to bring the oasis into the home; the colorful flowers and foliage brought relief during the hot and dry Andalusian summers.

As dusk wrapped the city in its hazy glow, we readied ourselves for New Year’s Eve: a five-course dinner at the Bodegas Mezquita. If you find yourself in Córdoba, you won’t go wrong spending an evening here. A flute of sparkling Cava, an assortment of Cordovan cheeses, and jamón ibérico from the valley of Los Pedroches formally inaugurated the feast.

A quarter before midnight, Pedro and Rosa, our jovial servers, brought us each a champagne flute containing twelve grapes, our uvas de la suerte. If the lucky grapes are eaten correctly—one at each stroke of the midnight bell—they promise a prosperous twelve months in the year ahead. 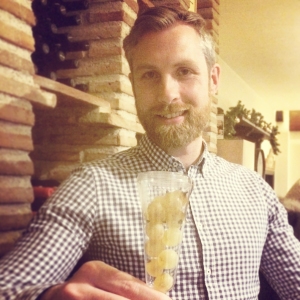 Looking around, it seemed like the locals took the tradition seriously, with many of them preferring to spend their last moments of 2016 peeling, halving, and deseeding the grapes for an optimum consumption. What a privilege to be able to witness and partake in such a fun custom.