Île de Ré: A Pearl in the French Atlantic

Sprays of sunlight showered the inside of our bus. It wasn’t too hot, not for a late July afternoon, but a little muggy nonetheless. I must have been weaving in and out of sleep because I don’t recall ever crossing the bridge separating the island from mainland France and the port of La Rochelle. I do remember passing the Abbaye des Châteliers; the ruins stood lustrously in a field of gold, a relic time couldn’t bear to fully ravage.

By the time we rolled into the pôle d’échanges just outside the fortified walls of Saint-Martin-de-Ré, I was fully awake. The doors opened and we were met by cooling billows of ocean breeze. There we were suddenly, midway down the French Atlantic coast between the weathered shores of Brittany and the temperate beaches of Basque Country. Frequented by the glamorous likes of Princess Caroline and Johnny Depp, Île de Ré was a perennial favorite destination of not only the French; over the course of the next few days, it would be our terrain. 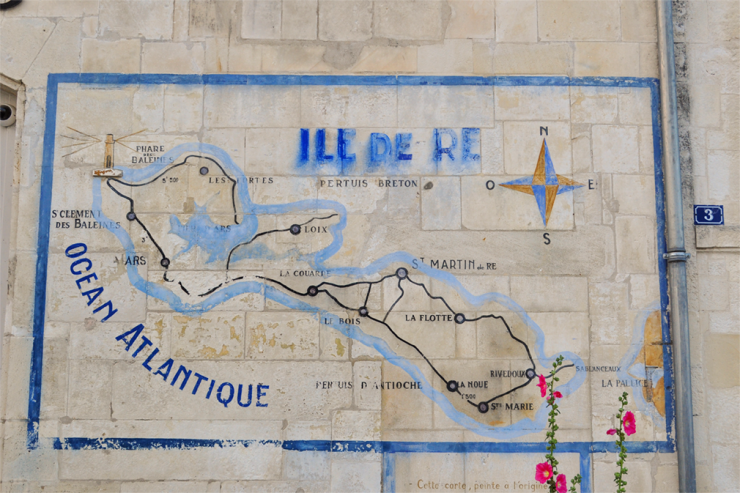 We trotted the cobbled road into Saint-Martin, passing window shutters baked pale by the sun and towering shoots of magenta hollyhocks. Just before reaching the harbor, we found the doors of La Baronnie. The woman at the reception greeted us, and we chatted a bit about the weather. It had been raining steadily on the mainland, and I was anxious. I feared that the rain would spoil our plans to discover the island by bicycle. Smiling, she explained that Île de Ré enjoyed its own microclimate and reassured us with an idiom.

“It could be raining ropes over in La Rochelle and here the sun would still be shining.” She led us on a tour of the perimeters and recounted some of the hotel’s extraordinary history. 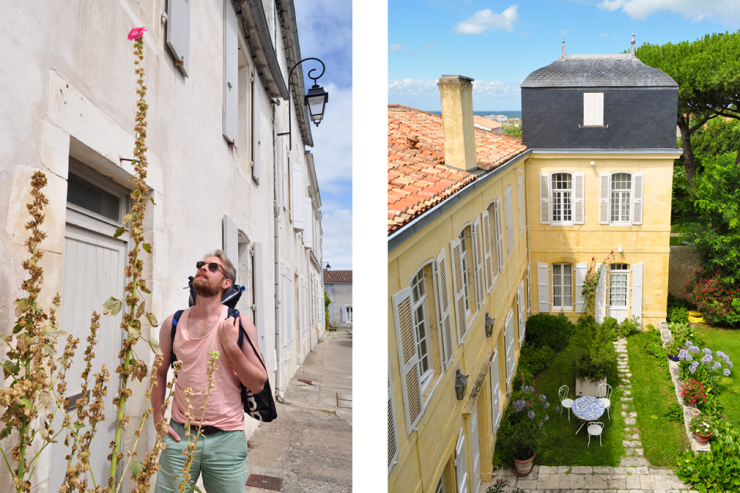 La Baronnie derives its name from the former barony of Ré, whose capital was in Saint-Martin and whose castle lay on the very spot where the hotel now stands. The present-day building was purchased in 1785 by Louis XVI for his wife, the extravagant Marie Antoinette. It became national property following the onset of the French Revolution and fell into dilapidation before being bought in 1996 and carefully restored to its current condition. We were taken to our room, a cozy nest converted from one of the manor’s rear towers. Meters away, the busy waterfront of Saint-Martin was calling. It was an idiosyncratic maritime melody. The shimmering dings of bicycles coming and going, the sound of boat stays slapping against their empty masts, and the squawks of seabirds and tourists all came together and filled the summer air in a raucous refrain. To the left, quayside restaurants were slowly coming out of their siestas to prepare for the evening diners. To the right, street vendors showed off large bowls of candied fruit and marinated olives, all of which begged to be sampled and savored. 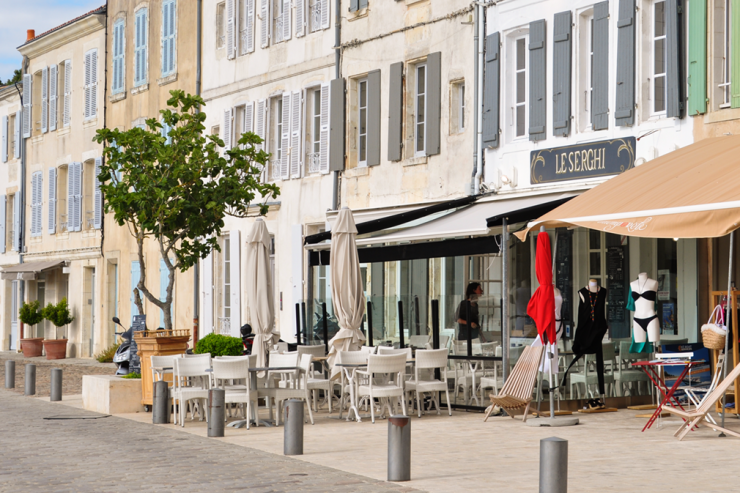 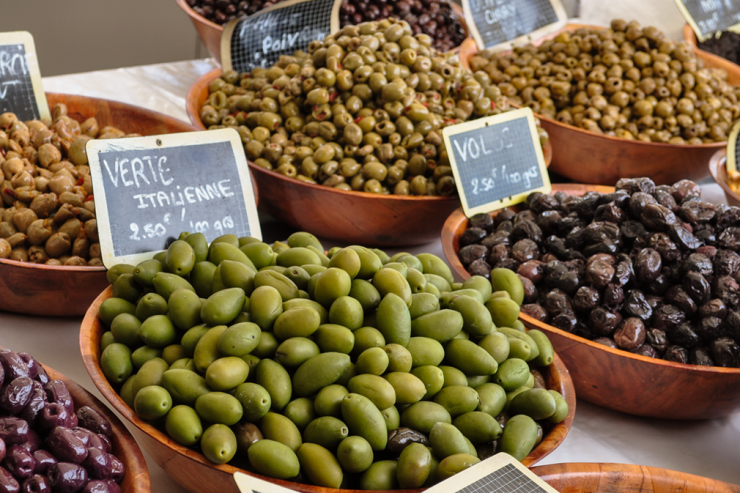 We strolled along the length of the quay, up and through narrower and quieter alleys, and eventually found ourselves on the city’s ramparts. The capital of an island bearing significant strategic importance, Saint-Martin was heavily fortified during the 17th century. Its intricately designed star-shaped bastion has withstood heavy sieges from both the British and the Dutch. As the last boat sputtered its way into the harbor, I felt the synchronized rumbling of my own stomach. Scuttling from restaurant to restaurant, we decided for Le Bistrot du Marin, a lively establishment with a hearty menu, hardworking staff, and one of the few kitchens open until eleven o’clock in the evening—a rarity on the island, we later found out. Two glasses of pastis, a steak tartare and some fries later, I was happier than a clam in high water. With our bellies full and moods bubbling, we retreated back to our quiet oasis in the tower.

As any local or tourist will say, biking is by far the best and most popular way to traverse the island. With over a hundred kilometers of routes to explore, we were eager to rent a pair of wheels and roll out of Saint-Martin. At the front desk, Joachim, the dashingly dressed receptionist du jour, handed us our bike vouchers and asked, “Do you like oysters?”

Just outside of Saint-Martin, the main bicycle path dips right, meets the ocean, and then runs alongside the shore for several kilometers. Here, maintaining a carefully calculated distance from and within each other, are the delectable oyster cabanas—small, seasonal family-run shacks that specialize in farming, shucking, and serving up their own bivalve harvests. The oysters cultivated in this region are first allowed to grow for several years out in the open sea. Upon reaching an edible size, they are then retrieved at low tide from their terroir and transported on amphibious tractors to claires, or small clay ponds filled to the knee with brackish water. It is in these algae-rich basins that the oysters develop their final sweet and hazelnut flavors and finish fattening, hence their appellation: fine de claire. 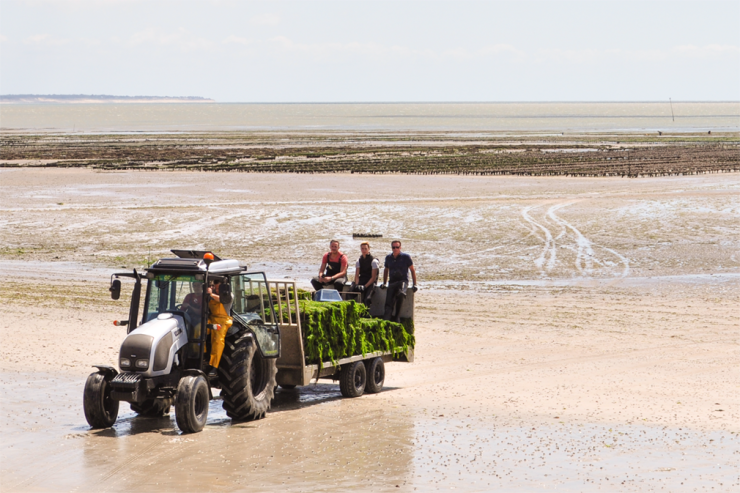 We learned many things about oysters that day. For example, summertime is when they spawn, so during these months, you might end up with an occasional milky-looking half-shell. We learned that while some people really like them laiteuses, or creamy, most people don’t. We were like most people. We learned that the number n° given to an oyster is an indication of its weight, not its quality: n°5 is the smallest and n°0 is the largest. I had a hard time slurping a n°2, and so we stuck mainly to more manageable mouthfuls of n°3 and n°4.

We honed the degustation ritual. We learned that the bread and butter accompanying a plate were meant to be the chaser; that the red wine vinegar and shallot mignonette was there to balance the shellfish’s natural, briny liquor. We learned to proficiently free the slippery flesh while holding a conversation. We learned to flip it over in its shell to ensure a smooth slurp. And we learned to chew, enjoy the texture, swallow, and relish the aftertaste. Dare I say, we had become sophomoric connoisseurs.

The French poet Léon-Paul Fargue once expressed his love of eating oysters, comparing it to “kissing the sea on the lips.” If there was any place to begin a lifelong love affair with oysters, we may have found it by those cabanas on Île de Ré. 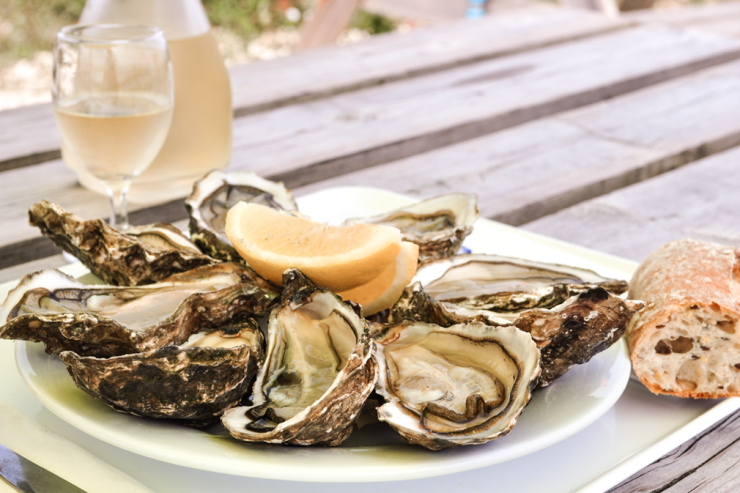 Past the alluring cabanas are stretches of salt pans, marshlands, vineyards, and golden fields of mustard flowers. Occasionally, we came across an equestrian center, where I was tempted to swap our wheels temporarily for a four-legged companion.

It wasn’t always leisurely biking: with no native mountains or sloping hills, we lay at the mercy of the winds. Cycling against headwinds was a sure workout, but there were a few fine days when the conditions were just right and a light zephyr swept us effortlessly from one end of the isle to the other. Further west from the mainland are the villages of La Couarde-sur-Mer and Ars-en-Ré. Smaller and quieter than Saint-Martin, they offer perhaps a more genuine peek into life on the island. Meandering through the open-air markets, we stumbled across hidden delights: artisanal cheeses and saucissons, local wines and handicrafts, and even a midday concert. Saint-Clément-des-Baleines, named for the large number of whales that used to become stranded on its sandbanks, marks the island’s western camp and our tour’s terminus. Just before reaching the lighthouse, we veered right onto a paved forested road to the beach for a taste of the salt air, the wild ocean wind, and a plunge into the untamed waves of the rough Atlantic.

Getting to Île de Ré

The high-speed train (TGV) from Paris to the port city of La Rochelle takes a little less than three hours. From La Rochelle, Les Mouettes bus lines 3A and 3B run hourly to Île de Ré, beginning seven o’clock in the morning until eight in the evening. Depending on where you get off, the bus journey can last between thirty minutes and two hours. 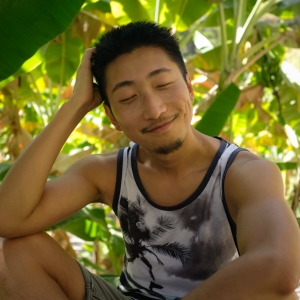