Sunnmøre: A Journey Along the Fjord

Long before it became an obstacle to get from A to Å, the fjord was the motorway which connected remote hamlets with the world outside. In wooden rowboats armed with oar and sail, the Viking settlers of Sunnmæri traversed its widths and lengths. Sunnmøre, as the region is known today, is site to some of Earth’s most spectacular sceneries, all of which can be seen on a journey along the fjord.

The journey begins by the sea. It is seawater which flooded the deep valley floors carved open by the ice over the course of millions of years, and it is seawater which first greets those wishing to explore the vast wonders of Western Norway. An island’s hop from Ålesund Airport is the fishing village of Alnes, where green pastures meet sandy beach. During the summer, when the days are long and golden, it’s easy to lose track of the hours: swimming, strolling, and filling up on savory sveler laden thick with sour cream and jam, all under the gaze of a watchful lighthouse.

The waves subside as the village bus inches its way inland and approaches the quieter waters of the Port of Ålesund. Known today as the adventure capital at the mouth of the fjords, Sunnmøre’s largest city harbors a remarkable past. In 1904, a devastating conflagration laid most of the area to rubble and left more than ten thousand people homeless. News of the fire attracted international sympathy, and generous aid poured in almost overnight. Scores of craftsmen near and far came to assist in the rebuilding effort. They shaped the town into a vision of the then-contemporary architectural style, Jugendstil, or Art Nouveau. Within the span of three years, more than three hundred buildings were erected side by side. 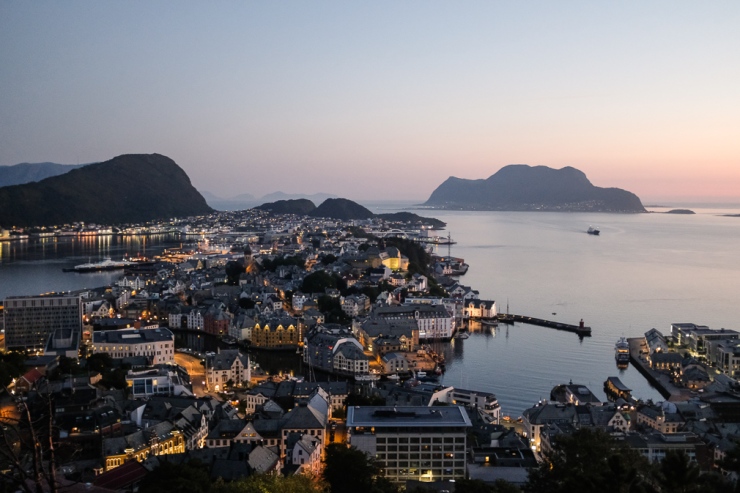 The best views of this new collective opus can be had from atop the mountain Aksla. Looking down over the glowing embers of the reborn town, there’s no wonder why Ålesund is considered to be the most beautiful city in Norway. It possesses all the elements of a Nordic fairy tale: crested roofs, vibrant façades, mystic peaks, and a fisherman’s infinite horizon. 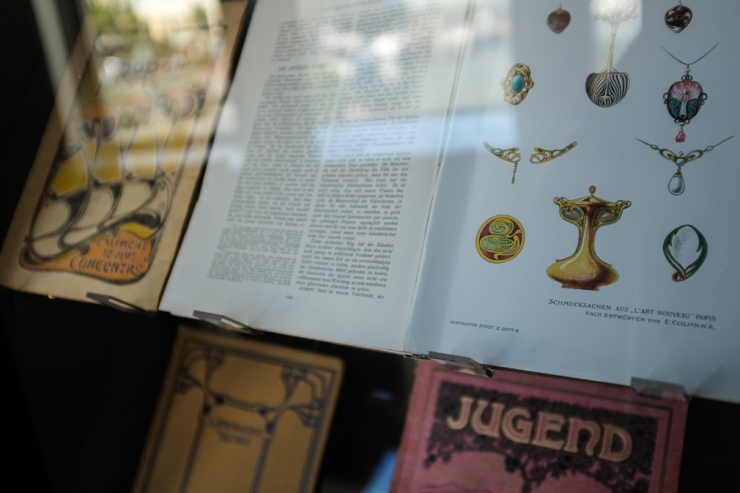 Apart from insurmountable beauty, a range of cultural and culinary offerings are on stock. The Jugendstilsenteret located in the ornate Swan Pharmacy is a meticulous preservation of Art Nouveau heritage, and its adjacent café is a green oasis amidst a flowing urban hub.

As Norway’s leading fishery center, Ålesund also has a long and rich piscatorial history. With an abundance of fresh seafood straight from the cold, clear waters of the Atlantic, there is no shortage of choice when it comes to dining. Culinary highlights range from opulent sea urchin to buttery seared scallops down to the traditional-as-can-be klippfisk—dried and salted cod.

Much like the city itself, klippfisk recipes have experienced a resurgence. Though Norway was and continues to be the world’s largest exporter of dried and salted cod, Norwegians themselves didn’t consume much of their own catch until it made a comeback from Iberia under the guise of a fiery tomato and paprika stew, bacalao. 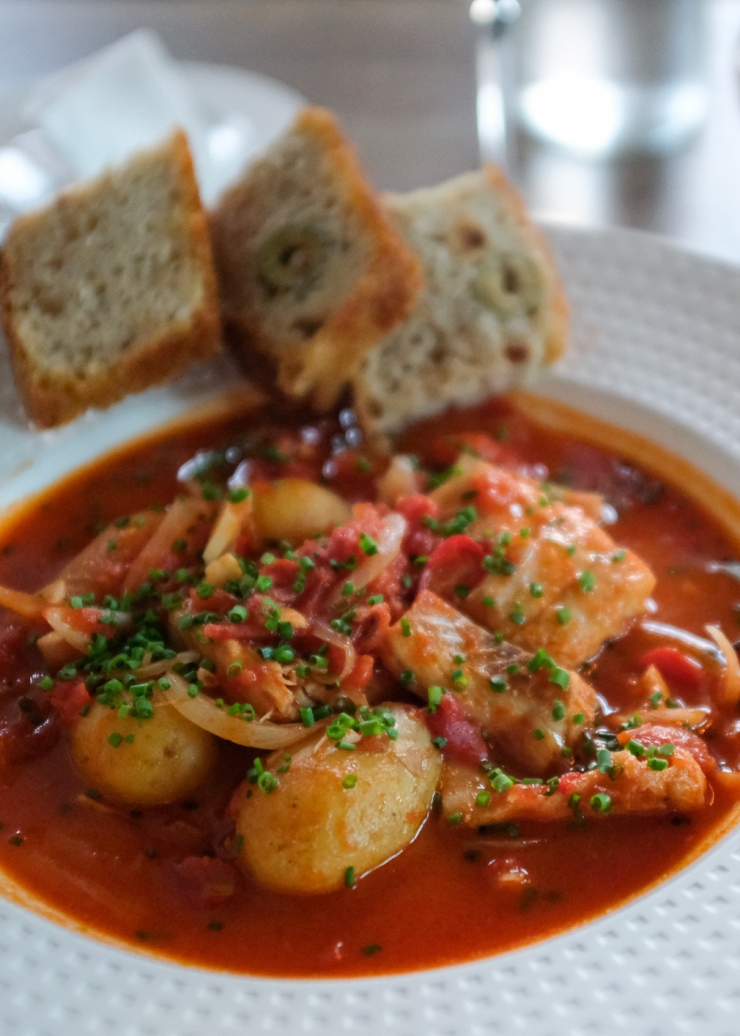 Leaving the charming quayside and alleys of Ålesund behind, the sound of the town is gradually enveloped by a tranquil lull. Soon, even the faint and steady purr of the catamaran disappears. Not a birdsong in the air, not a rustle from aboard: this is the outer region of the Storfjord.

A visual kaleidoscope fills the expanse of the aural void. Gliding over glasslike stillness, the fixtures of everyday life begin to lose their anchorage. Houses balance on the ridges of their rooftops. Trees expand every which way like inkblots on a Rorschach card. Sky and saltwater blend the boundaries of heaven and present, fusing to create an illusionary symmetry so sublime and flawless, the entire universe’s existence seems to spring from this very spot.

A rev of the motor finally pierces through the silence, and ensuing ripples fragment the mirror below into countless undulating pieces. The kaleidoscope spins on, with a new landscape coming into view. The steady rise of the hills marks the start of the Sunnmøre Alps and the beginning of the Sunnylvsfjord, one of the Storfjord’s many arms. Beaming rays fill the boat’s bow, illuminating the passengers on deck in a citron glow. In the distance, sunlight spills over the peaks like a heavy curtain of mist.

The ferry makes a final turn and veers headfirst into a blast of chilling wind. Standing sentinel over the narrow inlet with unyielding poise are the mountains, now at towering heights. From the cliffs, the legendary streams of the Seven Sisters drop like fine threads of hair, and small timber cottages peer shyly out of their shelves, their worn panels barely visible. These are the abandoned fjord farms of Knivsflå and Skageflå, relics of gone but not forgotten days. Perched precariously hundreds of meters above plunging walls of rock, there are few unlikelier places to make a homestead. But land during the Middle Ages was a nearly unobtainable commodity; poorer farmers had no choice but to scour further up the Sunnmøre Alps and make do with whatever space they could find. And so, despite a constant risk of falling boulders and avalanches, generations of families came to survive for centuries on this dramatic and unforgiving balcony of the Geirangerfjord with nothing more than a small plot and some livestock.

At the end of the fjord is Geiranger, the village with numbered days. Its two-hundred-odd residents live a life of calculated risk. They know something of which the hundreds of thousands of tourists who flock here annually are completely oblivious: that a nearby crevasse in the massif of Åkerneset could at any day cause a collapse of the entire mountainside, which, upon slipping into the fjord, would set off a wave so large that it will sweep the village into oblivion. But as for this very moment, everything is calm.

Fields of fuchsia-colored fireweed sway gently to a backdrop of idle ocean liners. By the docks, camper vans and group buses squat on top of each other, and blissful-minded travelers dot the trails of the streets like ants on a mission. Some escape the crowd and head west to quieter Homlong for a saline dip in the fjord or a day of kayaking. A few press on, past lichen-covered paths and emerald forests, toward the rustic meadows of Skageflå.

Many make the trek from Geiranger up along the surging falls of the Storfoss to Flydalsjuvet for the chance to witness one of Norway’s most iconic panoramas with their own eyes. Looking back over this glacial valley where the water runs as deep as the mountains soar high, one can’t help but marvel. How long did it take the Vikings to sail the way back to Álasund, the sea, and the rest of civilization?

To travel along the arm of a fjord is more than an experience. It is to share in the Norwegians’ love and respect for nature; it is to better understand how delicate the world we live in truly is; it is to take a trip back in time, past historic mountain farms and over the ghosts of receded glaciers; it is to venture into the deepest gorges of natural beauty and up the highest feats of human prowess.

Scandinavian Airlines and Norwegian offer daily direct flights between Oslo and Ålesund Vigra. From the airport, buses depart regularly for downtown Ålesund and take approximately 25 minutes. When traveling from cities in Western Norway such as Bergen and Trondheim, it may be easier to arrive by boat. The Hurtigruten makes a port of call in Ålesund (and Geiranger during the peak summer season), and port-to-port tickets are available for purchase.

The trip from Ålesund to Geiranger can be made by ferry, bus, or a combination of the two. Geiranger Fjordservice offers one-way and round-trip fjord cruises starting from NOK 580. Depending on the method of travel, the journey can last anywhere between three to five-and-a-half hours.