The mouth of the January River sang more than just the first beats of samba and the smooth rhythm of bossa nova. Rio de Janeiro, Brazil’s balmy balneário by the edge of Guanabara Bay, boasts a rich and regal repertoire of cultural heritage and untethered beauty. Encountered by the Portuguese on New Year’s Day in 1502, the city served as the imperial capital of Portugal during the time of Napoleon. It was the only instance in history that a European nation was ruled from one of its colonies.

Yet, there’s neither a trace of pomposity nor of royalty’s rigidness. Rio de Janeiro is as casual as can be. From street corners, the soul-stirring aromas of coconut milk and shrimp call out to empty stomachs. Equally as tempting are the Cariocas themselves, the unabashed residents of Rio who saunter up and down the beachfronts wearing nothing more than Havaianas and a strategically placed strip of polyester. There’s a flirtatiousness even in the way they speak: chewing, guzzling, and gushing their syllables like waves of honey. Every detail is an invitation to be ensnared by the allure of the Southern Hemisphere’s tropical Babylon. 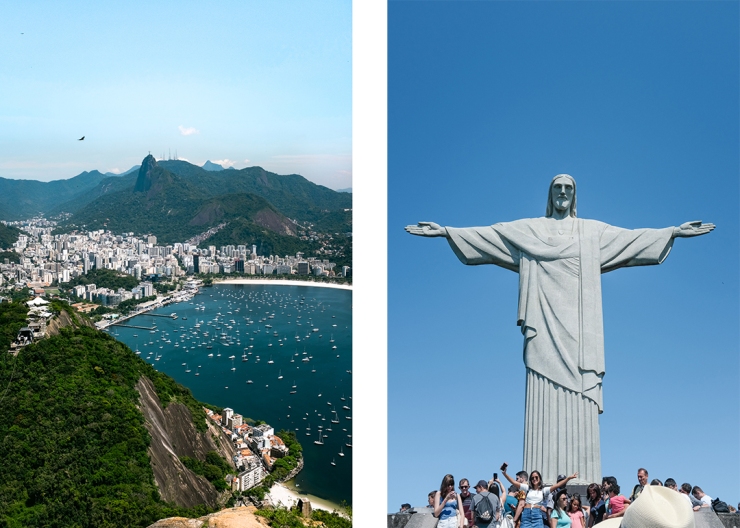 On the hunched back of Mount Corcovado, a stoic Redeemer looks over Rio and all its virtues—and vices. Although it’s possible to hike to the colossal monument from the flourishing verdure of Parque Lage at the foothills of the mountain, strings of robberies have terrorized visitors and tarnished the trail in recent months. For all its unparalleled beauty, Rio is a femme fatale of a city: poverty, drugs, corruption, and violence lurk behind the pretense of a paradisiacal landscape. One would be hard-pressed to encounter a tourist or local without a tale to tell about the city’s sinister side. Perhaps it is with this knowledge that the Christ looks on, heart bared, arms outstretched for eternity, spreading infinite compassion and acceptance to humanity below as they rub elbows and contend for the most divine selfie.

There are moody days when the rain pours a souring pout over the faces of the city. But when the clouds part and the urban prairie is flooded with light, it’s a love at first sight. Short of a helicopter ride, the best vistas of the whole of Rio can be admired from the mirante, or overlook, of Dona Marta. The hilltop viewpoint, situated above the favela of the same name famously immortalized by Michael Jackson, rewards the eye with a most sublime panorama of sandy shorelines, mossy hills, blue nacre water, and urban sprawl. 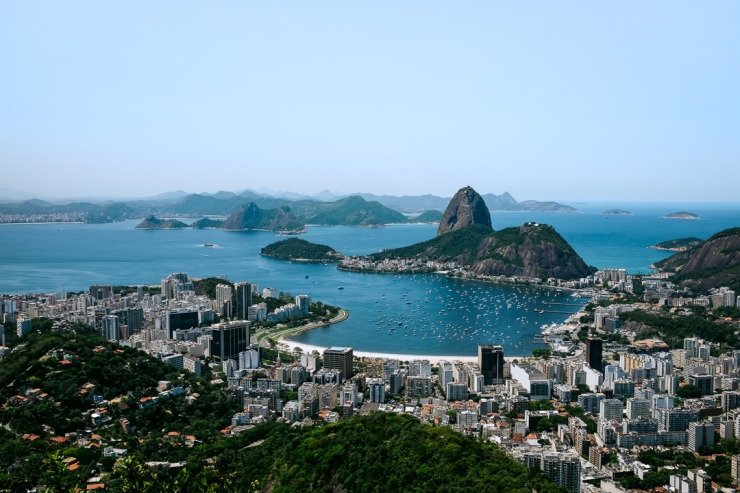 Over a brightly hued breakfast of honeydew, papaya, and soursop jam, we savored the sweetness of the slow life and watched the morning unfurl from our dining table at Arpoador. The golden sands of Ipanema spread before us like fine satin. Underneath the expanse of a periwinkle firmament, octogenarians ambled idly by with small wiener dogs, observing us as we observed them. In the distance, the ocean lapped drowsily, tossing and turning in slow motion as the early-bird surfers rode its eight a.m. swells. On the Uber ride along the length of Copacabana Beach, I put my light lexicon of Portuguese to test for the first time.

“Você fala inglês?” I asked our driver, who responded back with a beaming smile, “Não!” Neither of us was too bothered by the mutual unintelligibility: we palavered on, recycling the same sentences over and over, slower and louder. A smattering of interjections and the occasional gesture covered the rest of the conversation. Little by little, I began to feel confident, effervescent, surging—no longer a fish out of water. Brazil was a world away from any home we’ve known, but it embraced us with open arms.

We plopped onto Praia Vermelha, a small gem of a beach beneath the monolithic Pão de Açúcar, better known to Anglophones as Sugarloaf Mountain. Its name puzzled me; only later did I learn that the mountain is a namesake of the sugarloaves produced and sold until the turn of the twentieth century. The sturdy saccharine cones fell out of favor with the advent of wrapped sugar cubes, though they continue to play a starring role in the German tradition of the Feuerzangenbowle. True to its name, as we strolled along the strand and sipped gingerly out of young green coconuts, life by the Sugarloaf tasted undeniably sweeter. 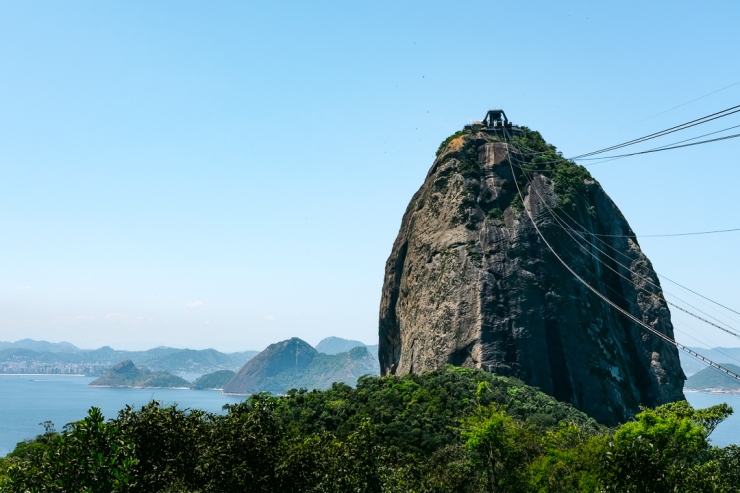 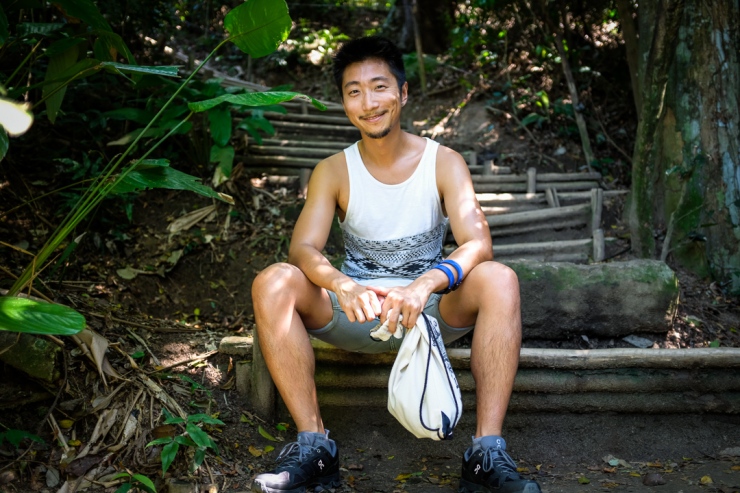 The way up to Pão de Açúcar is a delectable experience belonging to Rio’s most beautiful excursions. Owing to the proximity of Praia Vermelha’s military club, the surrounding area is a safe and beloved space. Under the shade of emerald groves of banana and palm, the paved road of Pista Cláudio Coutinho gently cups the cliffside against a backdrop of shimmering sea. A well-worn dirt path soon splits off, veering deeper into the heart of the lush jungle, and the landscape becomes as foreign as it is familiar. Trees with lecherous-looking globules of jackfruit, chirping kiskadees, blood-red tanagers, and pixie-faced marmosets with swinging striped tails surprise and delight in a strange new world. The end of the half-hour walk is marked by the summit of Morro da Urca, a small hill wedged between mountaintop and beach, where Brazil’s very first aerial lift still carries visitors across the final stretch to Sugarloaf’s panoramic peak.

It must have been midafternoon by the time we descended back to the city. The temperature was warm and perfect. We felt the tiredness in our legs, our eyes, our skin, but it was an enjoyable kind of exhaustion that left us tingling with fulfillment. I wiped the sweat off my forehead. It was flushed to the touch and wrinkled from the sun, but it made me glad. Exposed and tried by the elements of nature, I was living. We shuffled through the streets, finally settling for a late lunch in front of a hole-in-the-wall snack bar with picture menu boards. One of them had an overwhelmingly long list of fruit juices I had never heard of. Even the ones I knew had assumed vivacious Brazilian identities. Morango was strawberry. Abacaxi was pineapple. Jabuticaba was jabuticaba. Bacurí, cajá, cajú, cupuaçu, the list went on.

I took a gamble and ordered a cup of suco de cajá, yellow mombin juice. It had a slightly fermented look and tasted equally as dubious, with a puckering tartness that lingered. So much exoticism can be deceiving. But there was no time for disappointment as our food arrived and quickly dispelled any doubts we had about eating without the aid of TripAdvisor. Two platters of peppery sausage, steaming rice, fries, and chocolate-colored feijão filled the air with the fragrance of pure Brazilian comfort. It was a meal to remember: unpretentious, unfeigned, and delicious.

Upon retreating to our hotel, we quenched our thirst with tall glasses of tereré, another chilled exotic drink, but one which I took an immediate liking to this time. Smoky and sweet with a trace of plum, it reminded me of the sour prune and hawthorn drink I loved as a child during the hot summers in Beijing. Igor, our slim and cute receptionist, handed us two oversized cabana towels, and we headed down to the water to unwind and wait for the sun to sail over the famous twin pinnacles of Morro Dois Irmãos. 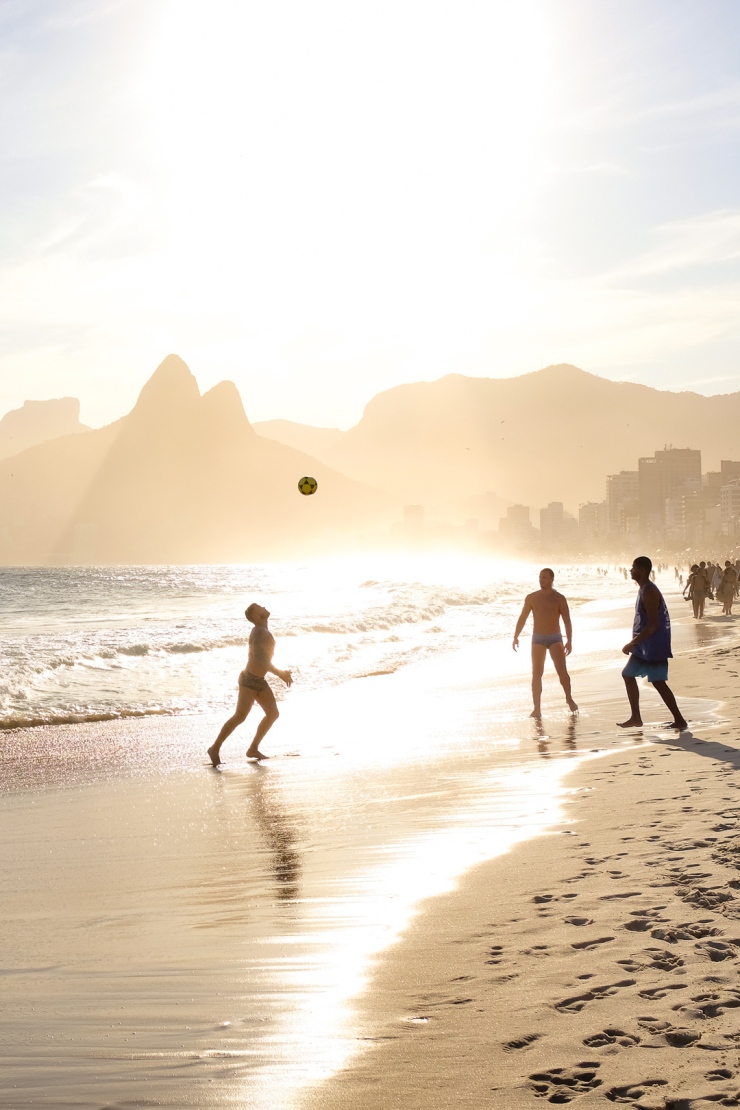 I remember the frigatebirds circling overhead, gliding in the spring breeze like pterodactyls, their wingspans as wide as a mile. A stone’s throw away, the Pedra Arpoador was spangled with visitors gathering together to celebrate the crepuscule. We found ourselves a less crowded spot by Posto 8 on Ipanema Beach to enjoy the communion. I was previously tipped by a friend of a friend that it was the best place for sightseeing, albeit of a different kind. Sculpted, sand-kissed bodies baked softly in the tropic breeze. I let my eyes wander, and it wasn’t long before I caught them lingering on the broad of a bronze, bare back…