Ilha Grande: A Return to Eden

The Tamoio people were the first to set foot on the land which they called the “great island,” Ipaum Guaçú. Portuguese seafarers kept the name, but christened it in their own tongue. For hundreds of years, Ilha Grande on Brazil’s Costa Verde was the antipode of a paradise. Its bright reefs and fine sandy shores witnessed the extirpation of the indigenous inhabitants and the crux of the transatlantic slave trade. Succeeding centuries saw the continued evolution of a most maledictive place, with both a lazaretto and a maximum security penitentiary constructed on its grounds. In light of the misfortunes that befell Ilha Grande and its unwilling captives, there was one hidden grace. Lack of urban development had given nature an unfettered hand in shaping the terrain of this emerald isle. After the prison’s closure in 1994, the island’s perfectly preserved biosphere took to the spotlight with a halcyon charm. Free from the menace of disease and Brazil’s most dangerous felons, this lustrous green pearl off the coast of Rio de Janeiro became at last, in the new millennium, somewhere to set foot on once more. 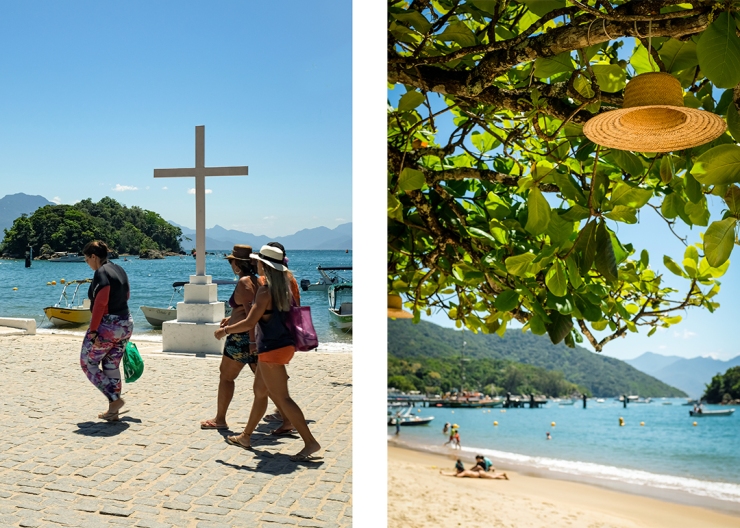 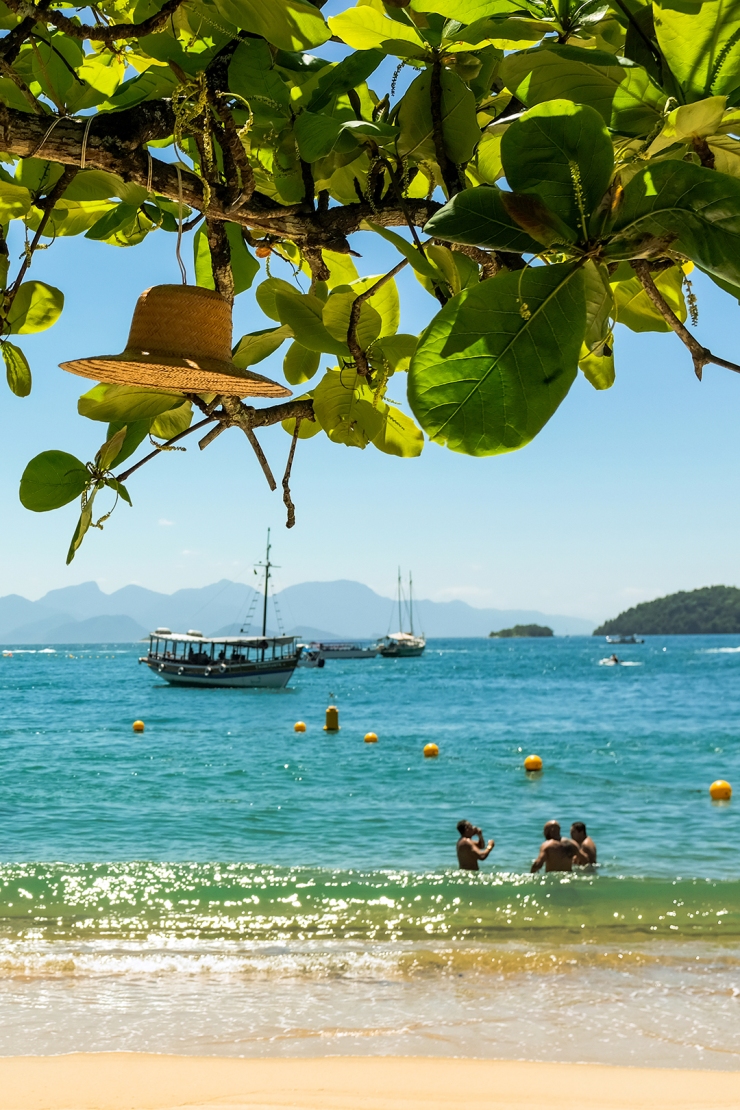 Ilha Grande is a slice of heaven for the nature-lover. Hems of lace-white waves, sequined coves of celestial blue, and plumed canopies draping gently over the hills are all breathtaking reminders of Mother Earth’s craft. Since opening up to tourism, this UNESCO World Heritage Site has experienced a naissance of sorts. Younger Cariocas know it as an idyllic escape from the busy buzz of Rio, as perfect for a romantic two-day slip as it is for a two-week Robinson Crusoe experience.

A series of trails forms a ring around the island, chaining together more than a hundred beaches. Scattered among them are relics of the past. Apart from the old prison and the remains of the lazaretto, Ilha Grande’s most significant religious monument can also be found by the sand. The ascetic Freguesia de Santana Church, built over the site of an ancient chapel, was once part of an important agricultural and industrial community that comprised a sugar mill, a firewater distillery, and extensive plantations of coffee, cane, vegetables, and grains. 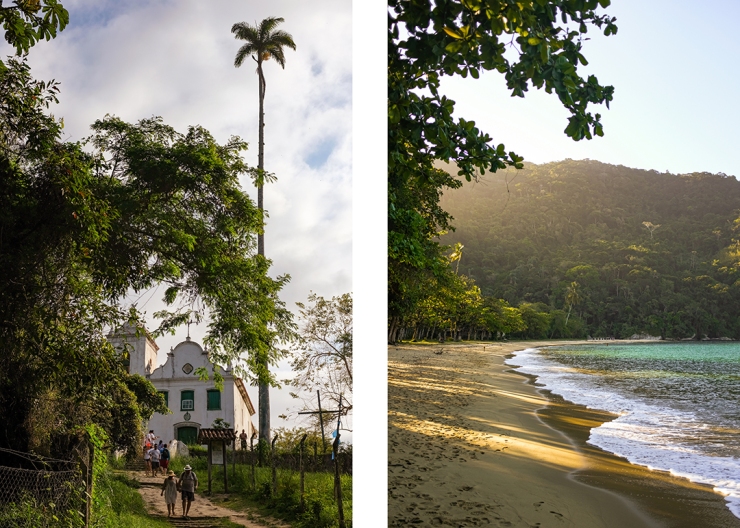 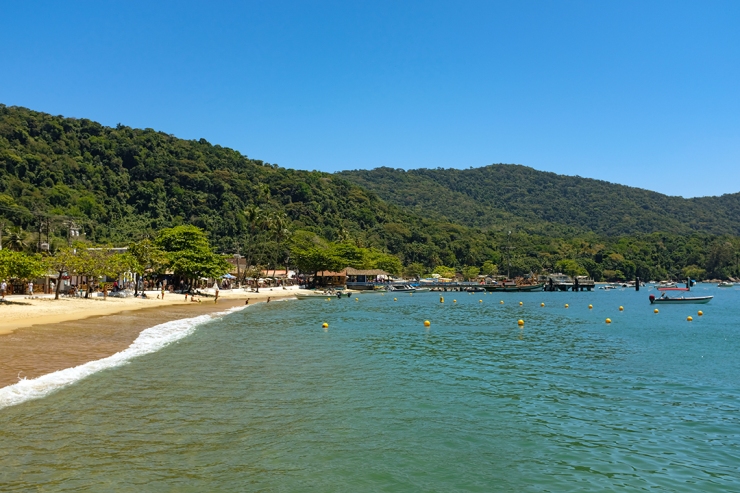 The regional government has taken great care to protect Ilha Grande’s natural habitats. As a result, it is one of only a handful of places in Brazil where cars are forbidden. Even in the largest village, Vila do Abraão, everyone gets around by foot. There is no rush. The only people who seem at all cognizant of the time are those waiting for their speedboat to somewhere else.

Far from the image of a traditional fishing hamlet, Abraão exudes a New Age aura. The waterfront is a palette of color, with splashes of banana, papaya, and coconut green one next to the other. Dreadlocked vendors show off assortments of cowry necklaces, free-spirit garments, and healing crystals en plein air, while under the shade of their carts, stray pups splay with tongues out in blissful slumber. Travel agency posters divvy up any leftover attention. Brassy images of guided hikes up the beaklike Pico do Papagaio and snorkel tours amongst the striped fishes of Lagoa Azul promise afternoons of limitless fun. It’s a vibrant scene, but not chaotic. 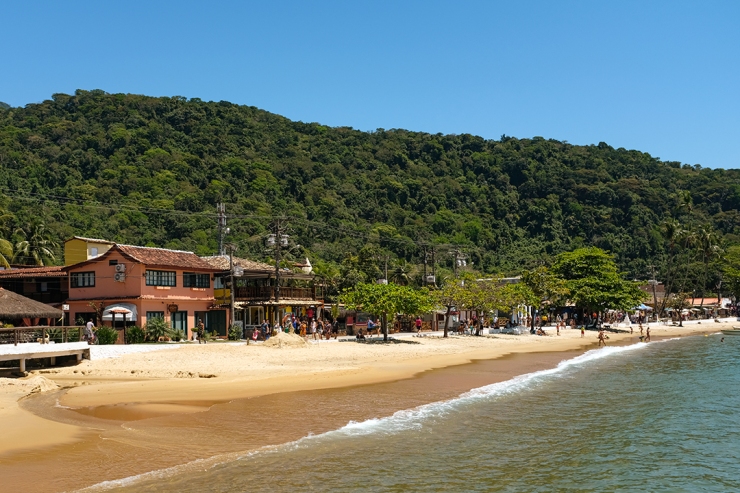 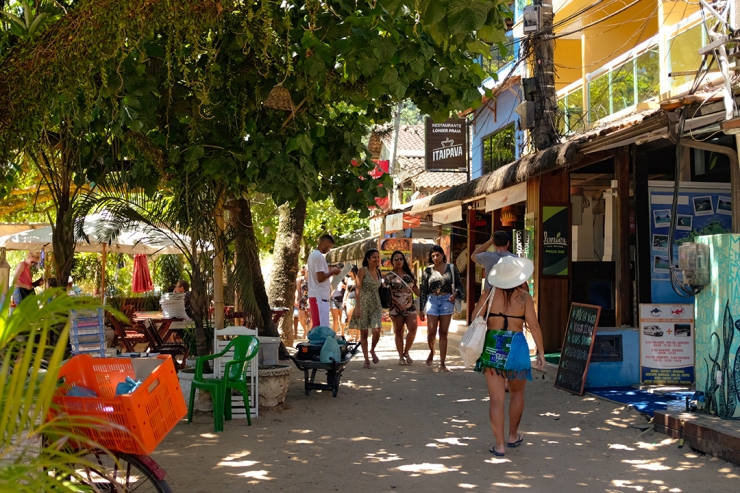 Having so far avoided the same nip-tuck forced upon many a beautiful islet by the pressures of tourism, Ilha Grande feels like a secret still to be spilled: laid-back, humble, and authentic. There are no luxury resorts, no ATMs, and those seeking a plushy Michelin-style experience will be sorely disappointed by homely menus of fried chicken, “Swiss” lemonade with condensed milk, and pirão de peixe—a warm and flavorful gruel of cassava and fish head. The island’s best places, although remote, are not exclusive. A pair of sturdy flip-flops, a large bottle of water, and thirty reais for the round-trip fare are all that’s needed to pass a picturesque afternoon on one of Brazil’s most dazzling beaches. At sea, the schooner stirs up ripples of diamonds so clear and sparkling, one could be forgiven for leaning over and trying to scoop up a handful. Upon arrival on the dock of Praia do Pouso, it’s a twenty-minute stroll through Tarzanesque jungles to Lopes Mendes. 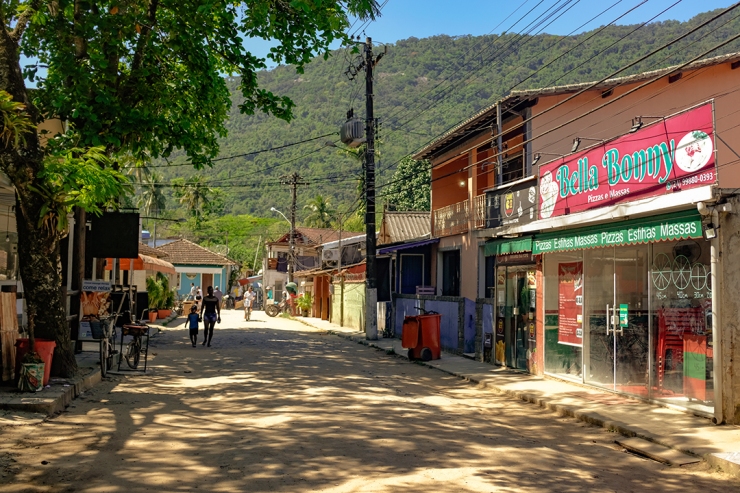 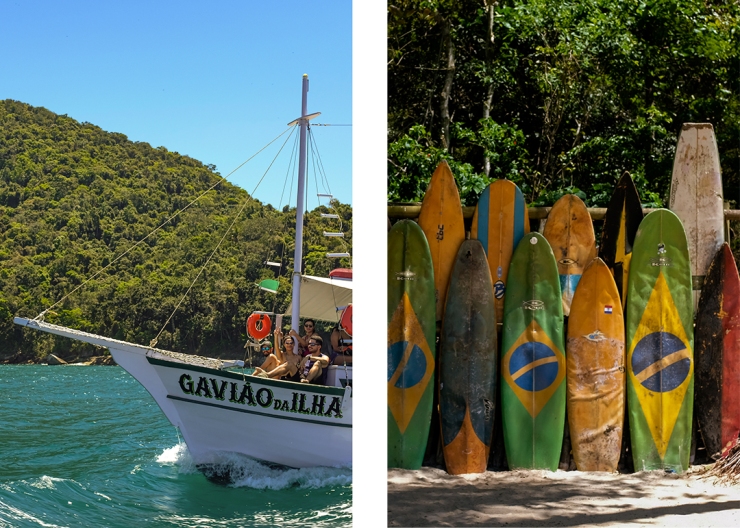 The vast, pristine expanse of Lopes Mendes lies in another dimension, in an epoch before man. Boats do not dare anchor in this hallowed place, as it means facing a capricious open sea.

Mist shrouds the prehistoric shoreline where the Atlantic Forest frolics with the ocean froth. Sunbeams lean into tall teak trees before setting the strand aflame in an iridescent glow. Down by the water, barrels of light blue roll endlessly over the heads and shoulders of the blissful Adams and Eves who have finally found their way back to the Garden of Eden. Untouched since the dawn of time, the journey to Lopes Mendes is a journey to Genesis. 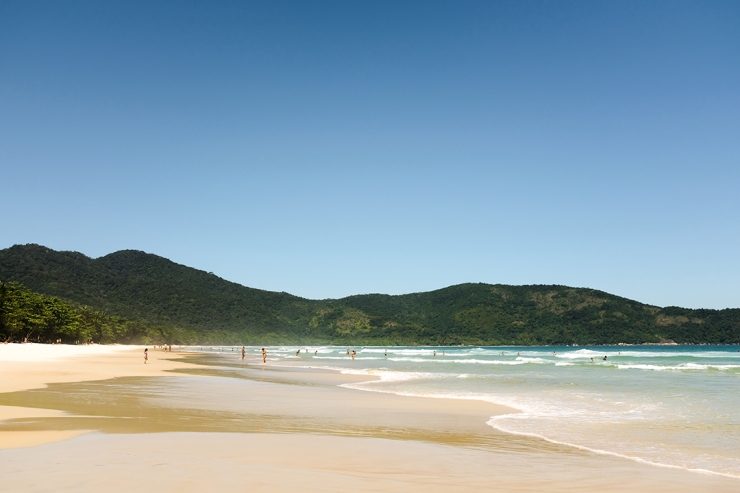 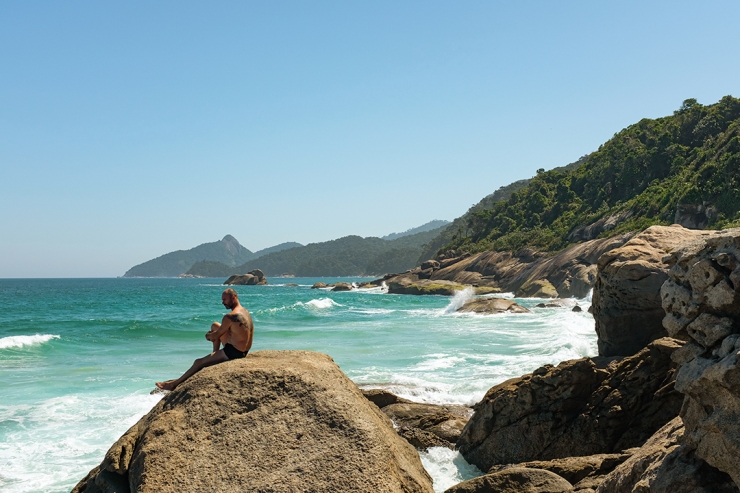 Getting to Ilha Grande

Getting to Ilha Grande from Rio de Janeiro takes approximately four to five hours. The most straightforward way to Ilha Grande is to book a direct van transfer. The Green Toad Bus, for example, arranges transportation from Rio city or Rio International Airport (GIG) to Abraão for US$35 and US$45 respectively. Alternatively, do like the Cariocas and take a Costa Verde bus departing hourly from Terminal Rodoviário Novo Rio to the town of Angra dos Reis. From Angra, the crossing to Vila do Abraão can be made by ferry, catamaran, or Flexboat.

In lieu of hotels, almost all of the lodging on Ilha Grande are in the form of small, family-run guesthouses called pousadas. The majority of them are in Abraão and have at most five or six rooms. Humbly decorated with local woods and plants, they blend harmoniously into the hillside, amongst the calls of tropical birds and the shade of banana trees. Many of the most charming ones, such as the Pousada Recanto das Estrelas and Casa Bonita Hospedagem & Café, are found at the very end of Abraão’s village roads, with double rooms starting from approximately R$615 per night.

Getting around Ilha Grande

Walking aside, watercrafts are the main form of transportation. Prices vary depending on the destination and the kind of vessel used. A one-way speedboat ride from the beach of Japariz to Abraão costs R$50, while a round trip by schooner to Lopes Mendes costs R$30. As there are no ATMs on the island, it’s advisable to bring extra cash to Ilha Grande, although many services such as organized tours, restaurants, and pousadas do accept credit cards. 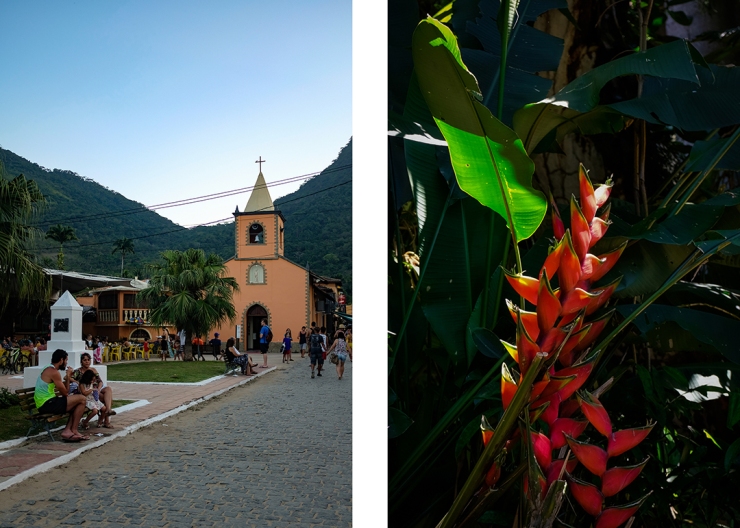 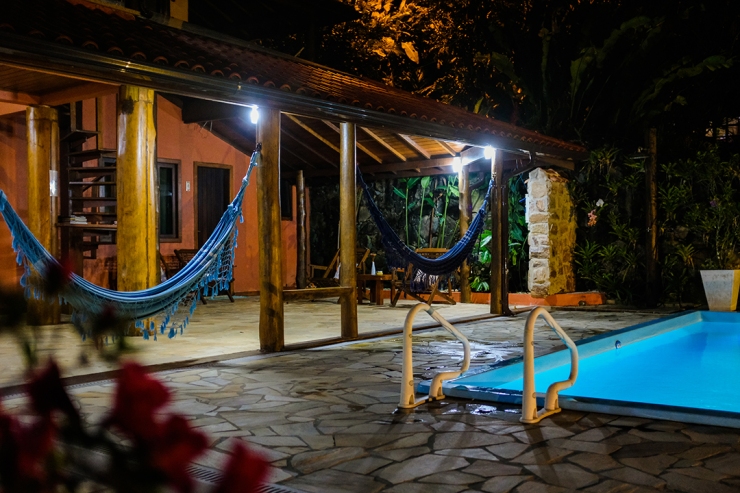